Processionary caterpillars: how to get rid of them safely

The pine processionary (Thaumetopoea or Traumatocampa pityocampa) is a moth that feeds on pine leaves (needles). Its preferred hosts are the black pine and Scots pine, but it can also attack other pine species and even conifers such as larch, cedar and fir. A closely related species is the oak processionary, but here in Italy the most widespread variant is the pine processionary.

Despite their amusing habit of travelling nose-to-tail in long lines, the larvae (caterpillars) of this insect are harmful and dangerous, so much so that on 30 October 2007 the Italian Ministry of Agricultural, Food and Forestry Policies enacted a decree that obligates owners of infested trees to help stem the spread of the pine processionary moth. In today's article we find out what measures can be taken against processionary moth caterpillars.

Why processionary moth caterpillars are a menace

The adult processionary moth is nocturnal and emerges between late June and early September. The females subsequently lay eggs which hatch after about a month into larvae that immediately begin to feed on pine needles and start building nests, which by early winter become dense permanent structures that enable them to survive through the coldest months. As they grow, the caterpillars develop thousands of urticating hairs.

You can easily identify pine processionary nests, which are large, white silken cocoons with a diameter of 10-20 cm, typically situated at the tips of sun-exposed tree branches. From the end of February to the beginning of April, the caterpillars leave the nests and descend from the host pine in a long line—hence the name “processionary”—to find a place to bury themselves and make a chrysalis, ready to transform into a moth during summer (metamorphosis).

We mentioned that processionary moth caterpillars are harmful and dangerous. On the one hand, they defoliate trees, which in itself doesn’t compromise the trees' survival, but makes them more vulnerable to attack by other parasites. On the other hand, their irritating hairs cause inflammation and allergic reactions, sometimes with very serious manifestations (anaphylactic shock), either through direct contact with the insect or due to contact with its hairs dispersed in the environment (in the air, on the ground or on garden furniture).

Irritations caused by the processionary moth can affect the skin, eyes and respiratory tract. This is why you should neither touch processionary moth caterpillars and nests, nor stop under or near infested trees, especially between autumn and early spring. Not only people are at risk, but also animals. In addition to sniffing the caterpillars, curious dogs and cats can bite or eat them, which in some cases can have fatal consequences.

How to get rid of processionary moth caterpillars

Processionary moth caterpillars are at their most dangerous during the period when they leave their nest, which is from the end of February to early April. So, before that period—i.e. between December and early February when the processionary nests are clearly visible—you can prune the host pine tree and then cut down and burn the branch that bears the nest. Pruning can also be done earlier, between September and December.

Depending on the situation, pruning should be done with the right tools—pruning chainsaw, telescopic pruner or manual pruning tools—and taking all the necessary safety measures (which includes wearing protective clothing), being as careful as possible to prevent the irritating effects of the insect.

Speaking of safety, here you will find a list of personal protective equipment to use with each gardening tool.

Compared with deciduous trees, pines and conifers in general have some peculiarities that affect pruning. Find out what they are in our article on pruning the Christmas pine tree. 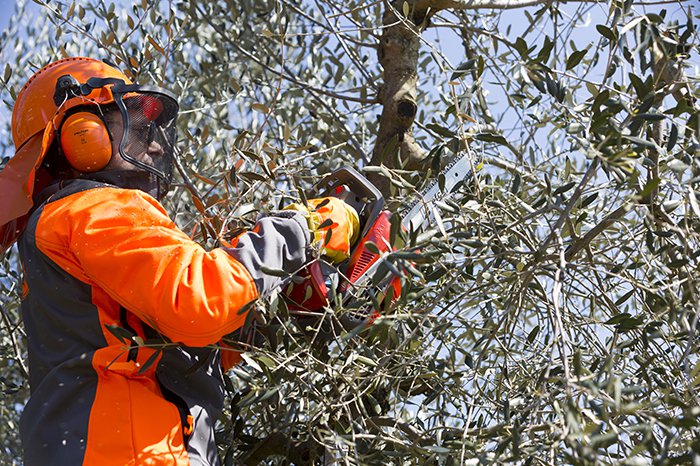 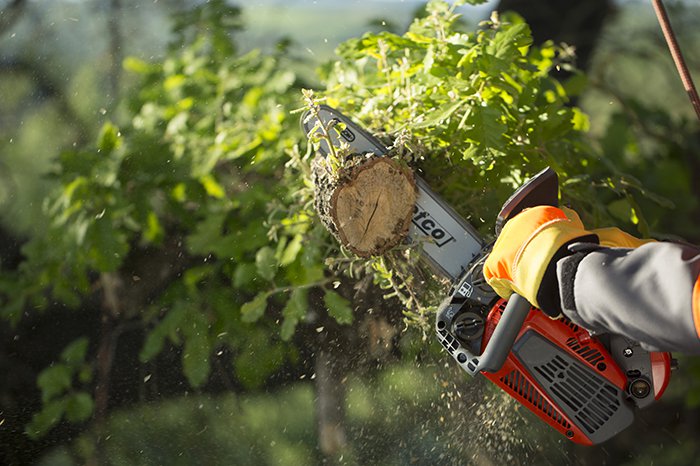 Cutting branches and burning processionary nests is feasible if only one tree or a few plants are infested. However, if the infestation affects a large area, eliminating the processionary caterpillars by destroying their winter nests can be a major challenge. In other cases, destroying the nest may be difficult because it is too high up, for example. So, what other measures can be taken against the processionary moth?

From February you can target the caterpillars themselves as they emerge from the nest after winter and travel down the pine trunk to bury themselves, by setting traps. One of the most effective solutions are tree collars that wrap around the trunk and contain a special glue that stops the caterpillars in their tracks.

Insecticide treatments are not recommended for use against processionary moth caterpillars. Although they can be sprayed onto the nests before the end of winter, on the caterpillars themselves in spring when they leave the nest, or on the young larvae at the end of summer, before they take refuge in their winter nest, such treatments don't prevent the urticating hairs from dispersing into the environment.

Another system that can eliminate processionaries, or at least prevent them from spreading, are pheromone traps, which are used to capture adult male insects before they mate, in order break the breeding cycle. They should be placed on the sun-exposed side of a medium-high branch, just before the metamorphosis period, i.e. from mid-June onwards. The pheromones are harmless to humans, animals and the environment.

Concrete, wood, metal or other materials?

Keep them working more efficiently and for longer

The benefits of topping, when to do it and why

On tomatoes, cucurbits and vines