How to prune lemon trees

the best techniques and times

The subject of this very article is pruning lemon trees. As with other fruit plants, there are various approaches to pruning lemon trees, and which one you should adopt depends on the age of the plant and the results you want to achieve. In this article we make a distinction between pruning to reshape the foliage, i.e. cosmetic interventions, and strictly production pruning, which is typically performed on lemon trees in citrus groves.

Lemon trees can be grown on the ground and in pots, as both an ornamental and production plant. The lemon is an everblooming plant that flowers mainly in spring and September, so fruits are produced in both winter and summer (the following year).

It is also an evergreen plant, like citruses in general. In this respect, the lemon is substantially different from other fruit trees, most of which are deciduous. In fact, in addition to carrying out photosynthesis, the leaves of citrus plants act as a store for nutrients. The branches of citrus trees also perform the same function and, in lemons trees, they grow at three times of year: spring, early summer and autumn. In deciduous plants, on the other hand, energy reserves are stored in the roots.

Therefore, when pruning lemons, bear in mind that removing too many branches—and, consequently, leaves—reduces the amount of nutrients available to the plant. Furthermore, the accumulation of energy reserves in leaves and branches peaks in February-March, before the vegetative recovery process starts, and fruit setting, which is the stage in which fruits develop from the flowers, depends entirely on the quantity of stored nutrients. So, drastic pruning of lemon trees should be avoided: the more you cut, the less productive the plant will be in subsequent years because it will react by developing more foliage than fruit.

Given the crucial function that leaves and branches perform in citrus plants, lemon tree pruning should not be done in February and March. It is advisable to prune lemon trees every year, the best time being between late winter and early spring (April-June), with a slight delay in less mild areas and wherever there is a likelihood of late frosts. Between June and July you can then do some “containment” pruning to eliminate any suckers. As a rule, when pruning lemon trees you should avoid very cold and very hot periods.

Pruning lemon trees to tidy up the foliage helps to give the plants a regular appearance—usually globe-like—as well as improving their productivity. In practice, you should remove superfluous branches and strengthen the most promising ones, by getting rid of dead, broken or diseased limbs:

What do you need to prune lemon trees? You just need a pair of shears, such as Efco universal shears and, ideally, a lopper for the larger branches, for example the TR80M lopper. Normally lemon branches are thorny, so we recommend that you wear some chain-resistant or utility gloves and protective glasses or a face shield.

Lemon plants are sensitive to wind and cold: at 0°C they shed their leaves, and at -6°C they cannot survive the damage that freezing causes to the woody tissues. Find out how to prevent winter damage to plants—including lemon trees—in gardens and vases 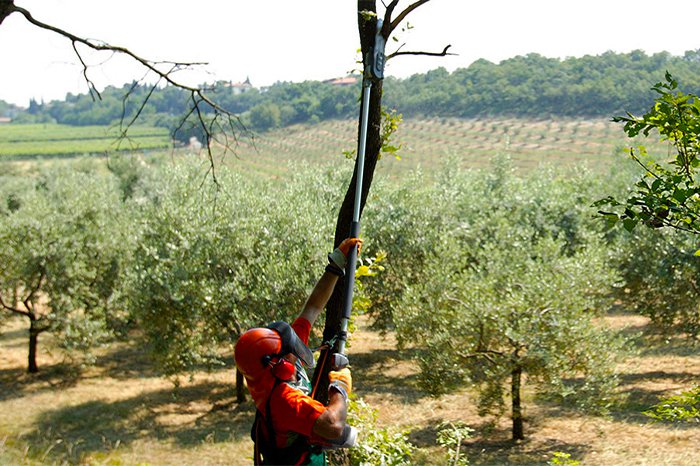 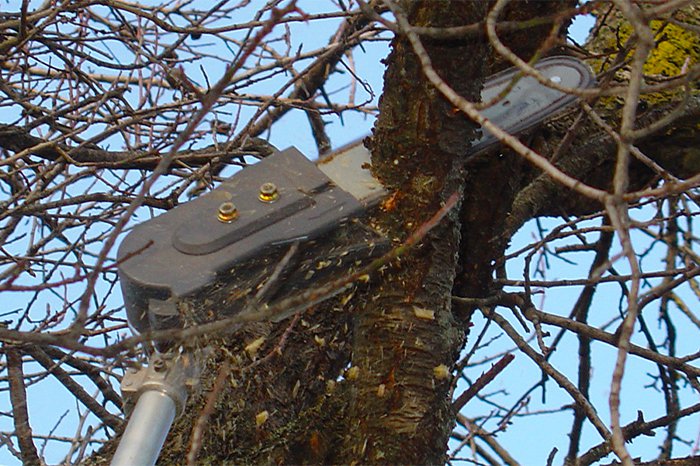 Production pruning of lemon trees, which should be done on adult plants, is intended to obtain a consistent yield every year:

To prune the sturdiest branches of lemon trees in a citrus grove, you can work from ground level using a telescopic pruner, such as the Efco PTX 2710 with 1 kW power rating, or the 1.1 kW DS 3000 multifunction brushcutter, which you can convert into a pruner in seconds and without tools, using the appropriate pruner accessory.

To work safely when using your pruner, we also recommend that you wear a cut-resistant jacket and a protective helmet with face shield and built-in noise filtering ear defenders.

Do you want to replace your manual telescopic pruner with a petrol engine model? You can find out more about them by reading our article on how a pruner works.

A versatile tool for multiple preventative and curative treatments.

Engine maintenance: the importance of quality oils a...

So your chainsaw works better and for longer

A common disease of vines