How to prune maple trees

Maples are very common in Europe, Asia and North America: there are more than 200 species with different characteristics. They vary in appearance, from shrubs to trees of varying height — some species reach up to 40 m. They also have deciduous leaves in a variety of shapes. However, one thing that all species of maple have in common is the stunning sight of their colourful leaves in autumn, an explosion of yellows, oranges and reds. In some countries such as the United States and Japan, maple foliage is even a tourist attraction.

Maples are also widespread in Italy, which is home to indigenous and non-native species, and are popular as ornamental plants, particularly the field maple, acer negundo (or boxelder maple), palmate maple (also known as the Japanese maple). Precisely because of its elegant shape and beautiful leaves—which turn brilliant red in autumn—the Japanese maple is often used as a garden focal point.

As with other trees, maples need pruning to:

For maples, drastic pruning is not recommended: as with other plants, it is preferable to make smaller and more frequent cuts, rather than very invasive cuts on an occasional basis.

As you know, there is a variety of pruning accessories to choose from: manual saws, telescopic saws, loppers and professional pruning shears such as the Universal shears with steel blade, curved anvil and aluminium handle, for pruning branches up to 2.5 cm thick.

In order to prune faster, or if you need to work on larger branches, you can use an electric or petrol engine chainsaw. A compact chainsaw like the MT 3710 is perfect for small/medium-sized maples.

If your tree is bigger, it’s better to opt for a pruning chainsaw like the MTT 2500, which is compact and lightweight, for precision cutting even when tree-climbing. Watch it in action here.

How to prune maples: the techniques to use

You may need to prune maples to remove parts attacked by pests or to fix damage caused by weather or improper pruning.

Apart from these specific situations, as a rule only perform maintenance pruning on adult maple trees.

In all these cases, you need to combine two basic pruning tasks: cutting branches off at the base and shortening branches (up to 1/3). For both of these procedures, it is essential to carefully choose the cutting point and decide which branches to remove or leave. So:

To reduce the volume of a maple tree’s crown:

On the other hand, if the plant is not vigorous, shorten young branches to stimulate the production of new foliage.

- take advantage of the work done to lighten the crown 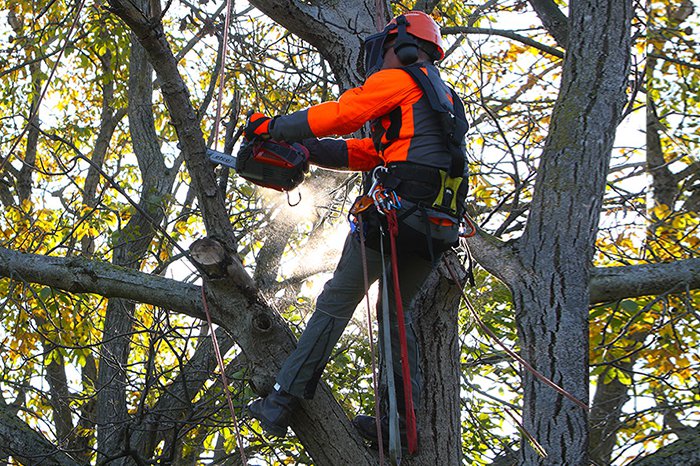 The best time for pruning maples

In the case of Japanese or palmate maples, as well as field maples and acer negundo, it is advisable to prune only if necessary, with measured cuts and at the correct times of year.

What is the optimal time of year for pruning maples? In general it is advisable to prune when the plants are dormant, which is after the leaves have fallen and before new buds bloom: for deciduous trees like the maple, that means between early November and late February.

From mid-autumn to mid-winter is also a good time, because pests are less active and the risk of parasitic attack due to the tree being weakened by cuts is lower. In order to prevent frost damage on the cutting surfaces, it is better to avoid cutting when it is too cold.

Maples tend to emerge from dormancy early: in late winter the sap begins to flow and, if the days are particularly sunny and warm, the trees may germinate and bloom prematurely. In this case, pruning at the wrong time can result in loss of sap from the cuts, making it difficult for the plant to heal and causing it physiological stress.

Although you can cut off dry branches at any time of year, it is advisable not to prune plants during their most vulnerable periods:

Blower-vacuum: all the possible uses

Do much more than just clearing leaves

To receive many offers, advice and news on the green world