A common disease of vines

Powdery mildew is a pathogen affecting vines that is caused by the fungus Erysiphe necator (also known as Uncinula necator) and its anamorph Oidium tuckeri.

Its best known and most recognisable symptom is a whitish mould that covers affected parts, hence why powdery mildew is also known here in Italy as white mould. Today we are talking about powdery mildew, one of the most widespread fungal diseases of vines. We reveal what it is, how it develops and how to protect your vineyard.

What is grapevine powdery mildew?

During winter, the fungus responsible for grapevine powdery mildew survives on or around plants as thread-like mycelium in the buds or fruiting bodies (cleistothecia or chasmothecia) on bark and leaves. Mycelium is a network of elongated cells that grows from a spore, develops on the green parts of vines (the leaves, herbaceous shoots, peduncles, inflorescences and bunches until veraison) and produces spores (conidia) through which it reproduces. The fungus also reproduces through fruiting bodies that contain other spores (ascospores). These spores are like the "seeds" through which the fungus multiplies.

Cleistothecia develop in August/September on the infected tissues of plants. In spring, the rising temperature and humidity stimulates them to release spores. These spores infect the vine tissues, producing symptoms that are not always easy to identify, such as chlorotic (yellow or light green) spots on the underside of the leaves. Ascospore infections (primary infections) appear in the parts of the vineyard most affected by powdery mildew the year before.

When spring arrives, mycelium-infected buds give rise to "flag shoots". These are young, underdeveloped leaves that curl upwards and produce conidia that infects neighbouring shoots and vines. This secondary infection by conidia produces the typical whitish mould that makes grapevine powdery mildew so distinctive and causes the pathogen to spread throughout the vineyard.

In practice, primary and secondary infections overlap for part of the year. Hence the epidemic of powdery mildew, which usually appears in vineyards from May/June onwards, is the consequence of early infections—primary infection by ascospores—which affect the vine right from the first vegetative phases, specifically between budding/pre-flowering and bunch formation. The spread and severity of powdery mildew in the vineyard therefore depend on the quantity of cleistothecia produced at the end of the previous summer/early autumn.

Although the powdery mildew fungus only affects the surface of the tissues it infects, without penetrating into the cells, it causes considerable damage not only in the vineyard, but also in the cellar, in terms of stunted plant development, susceptibility to other diseases, highly acidic grapes, lost production and poor quality wine.

How to prevent powdery mildew

Besides the presence of young growing vegetation, what favours grapevine powdery mildew? Primary (ascosporic) infections typical to the early part of the growing season occur with rainy weather and temperatures above 10°C. By contrast, secondary (conidial) infections, which are triggered later in the year, need higher temperatures (ideally 20-25°C), low humidity and no rain (because it washes away the conidia). Powdery mildew grows faster inside the canopy, which is shaded from UV rays that reduce the vitality of the fungus.

The most delicate period for vines, when they are most vulnerable to powdery mildew, starts from the pre- and post-flowering phase onwards until bunch closure and beyond. In the case of black grapes, veraison (when the bunches change colour) affords a degree of immunity thanks to the increase of substances that inhibit the parasite, whereas for white grapes, powdery mildew remains dangerous even when during veraison.

How to treat grapevine powdery mildew? For powdery mildew, treatment strategies are less effective than prevention and early intervention. Once an infection has already taken hold, all you can do is limit the damage as much as possible. 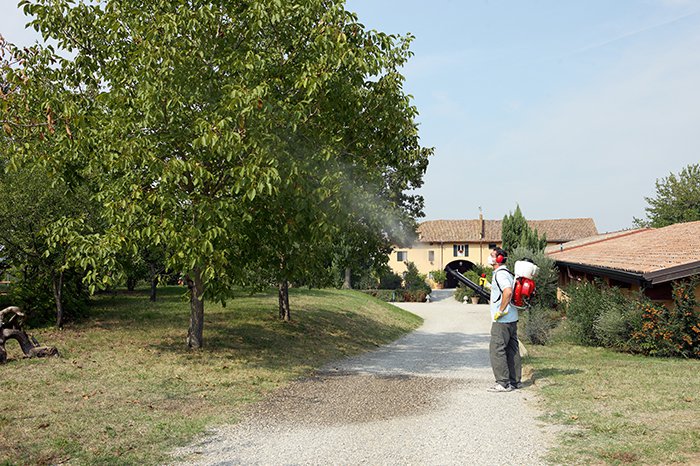 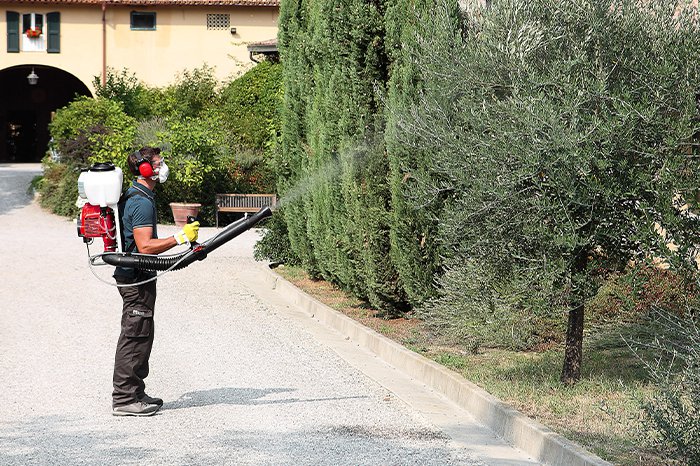 Preventing powdery mildew in the vineyard starts with decisions made before planting the vines and continues with routine maintenance, for example:

How to treat grapevine powdery mildew

An effective defence strategy against powdery mildew should not be limited to the use of fungicides during the growing season. You should start the previous season by checking for cleistothecia formation after the harvest. In this phase you can effectively employ a natural enemy of the powdery mildew fungus: Ampelomyces quisqualis, a parasite that destroys its cleistothecia.

From the first stages of plant development (budding) to pre-flowering, it is essential to keep primary (ascosporic) infections under control. Then, from flowering to veraison, the conidial stage of the powdery mildew must be contained using fungicides suitable for the risk level and the development stage of the vines (as a rule of thumb, from the end of flowering/fruit set, the main objective should be to protect the clusters).

As we mentioned, grapevine powdery mildew does not invade vegetal tissues, so surface treatments, such as those based on sulfur, strobilurins or metrafenone, can be effective against it. In the preventive phase, you can alternate these treatments with endotherapy products (which are absorbed by the plant and work from inside it), such as EBIs (ergosterol biosynthesis inhibitors) such as those based on spiroxamine.

Sulfur is a traditional remedy that is still widely used against powdery mildew and is effective right from the beginning of the growing season: you can apply it in multiple forms, as a dry or wettable powder. You can mix it with water and apply it using a mistblower or, alternatively, with a blower converted into a mistblower using a conversion kit, such as the Efco SA 2063).

Are there natural remedies for grapevine powdery mildew? Sulfur is used in organic farming. Other natural active substances that counteract powdery mildew include sodium and potassium bicarbonates.

Fungicide treatments for powdery mildew and any other pathogens should only be applied after wearing adequate protective clothing. For every activity in the vineyard and, more generally in the countryside, you will need suitable safety equipment: here you will find a reference article explaining which PPE (personal protective equipment) to use.

A versatile tool for multiple preventative and curative treatments.

Engine maintenance: the importance of quality oils a...

So your chainsaw works better and for longer

How to eliminate it? Is it burnable? Why not recycle it?